The Indian Navy wants to equip its fleet of aircraft carriers with TEDBFs (Twin Engine Deck Based Fighters) that are made in India. Based on the Indian Navy’s requirements for the Multirole Carrier Borne Fighters (MRCBF), the Defence Research and Development Organisation (DRDO) and the Aeronautical Development Agency (ADA) announced in April 2020 that they would develop a new carrier-based fighter aircraft. The project was given the go-ahead by the government in the same year.

In September 2022, ADA started the first phase of TEDBF’s design, which should be finished in two years. There are three parts to the design process. The first step is to measure, tweak, and improve the TEDBF’s aerodynamic design.

The aerodynamic shape will then be changed using CFD Analysis. After that, a model for testing TEDBF aircraft at high and low speeds in a wind tunnel would be made. In the last part of the preliminary phase, the wind tunnel will be used to test the canard, the air intake, and the DSI.

The TEDBF project should move from the design phase to the implementation phase in about two to three years. If everything goes well, the plane will be done by 2026.

Someone get us out of the DRDO Hall D or well never leave!!!!!!

The MiG-29K is used by the Indian Navy on its carriers, which has some operational problems. People have said that the engine has problems with fuel, uses too much oil, and breaks down too often.

Under the TEDBF project, a two-engine delta-wing fighter with a canard is being made. The ADA will design the plane, and HAL will build it. As a plane that can do more than one thing, it will be used for air supremacy, theatre defence, naval operations, and electronic warfare. On the INS Vikramaditya and the INS Vikrant, the MiG-29K is expected to be replaced by the TEDBF.

The TEDBF programme was officially announced because of problems with the single-engine carrier-based Tejas fighter, the naval LCA (N-LCA), and the possible end of the programme. At Aero India 2021, a model of the plane was shown. The first flight is expected to happen in 2026, and the vehicle should be in use by 2032.

The N-LCA programme helped the ADA designers understand the carrier interface, which includes taking off from a ski jump at an angle of 140 degrees, taking off from a distance of 200 metres or less on an aircraft carrier, and landing on the deck. At the INS Hansa, Goa, Shore Based Test Facility, the plane is being checked out (SBTF). The two N-LCAs being tested are modified versions made for the Air Force. Soon, a prototype of the navy version will be ready.

With its two engines, the TEDBF will be able to take off from the aircraft carrier more quickly, turn more easily, fly farther, and carry more weapons. Also, if one of the engines breaks down in battle, it will help the ship stay alive longer. It can be stored in aircraft carrier hangars because its wings can fold up. Indian ideas and manufacturing would be very important to the plane. First estimates say that making prototypes that can fly will cost around $1.75 billion.

A phased array radar is planned for TEDBF. There are thirteen hardpoints on the outside of the plane, including two on the tips of the wings for small air-to-air missiles.

Omni-Role Combat Aircraft (ORCA), which is being made for the air force, will be like TEDBF for the Navy. ORCA is a tonne and a half lighter than the version that lands on a deck because it doesn’t need ruggedized landing gear and stronger structure for deck landing.

TEDBF is expected to have one pilot on board, a length of 16.3 metres, a wingspan of 11.30 metres, and a maximum weight of 26,000 kilogrammes when it takes off. The plane is powered by two General Electric F414 diesel engines that have a thrust of 5965 kgf. The plane could have a top speed of 1.6 Mach (2000 km/h), a ceiling of 18000 metres, a combat radius of 800 kilometres without refuelling in the air, and weapons like a 30-mm gun, guided and unguided rockets, and 8000-kilogram bombs.

TEDBF is a new design that uses technology made and tested as part of the LCA Tejas programme. Like the Tejas Mk2, there isn’t much space between the engine intakes and the canards. The front fuselage is set apart by the Leading Edge Root Extension (LERX).

The plane will be able to take off easily and haul a lot of weight from the ski jump because it has a high Lift to Drag ratio and close-coupled canards. The delta-shaped wings could create negative lift at high wind speeds, which would give the plane constant lift (by acting as a rear stabilizer). The front fuselage has been changed to make it less visible to radar.

TEDBF will have a DSI (Diverterless Supersonic Inlet), which improves engine airflow, makes the plane lighter, and makes it less visible to radar. So, it will become more quiet.

MRCBF is a temporary solution

The MRCBF will be used as a stopgap measure while the TEDBF is being made. Both the Boeing F/A-18E/F Super Hornet and the French Rafale M have passed the tests and are now the only two planes left in the running for the contract.

Admiral SN Ghormade, Vice Chief of the Indian Navy, told reporters that Rafale and Boeing F-18 planes had been tested to show that they could operate from Indian aircraft carriers. He said that the goal of the Indian Navy is to become more Indian. So, the MRCBF and Mig-29s will only be a short-term fix. He also said that TEDBF might be ready in 3–5 years.

Earlier, the Navy said it wasn’t interested in a fighter with only one engine. This meant that the Swedish Sea Gripen, also called Gripen Maritime, was out of the running.

Indian Navy Will Get The Scorpene Class Submarine Vagir In December 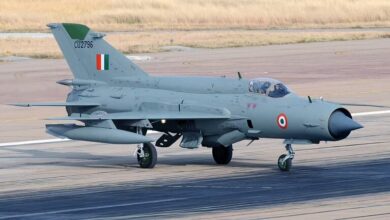