On Sunday, Union home and cooperation minister Amit Shah will open a border viewing point at Nadabet in Gujarat’s Banaskantha district, similar to the Wagha-Atari Border in Punjab.

“Under the Seema Darshan Project, the state tourism department is developing Nadabet, on the India-Pakistan border, as a tourist attraction destination at a cost of 125 crore,” Alok Pandey, managing director of Tourism Corporation of Gujarat Ltd, told Hindustan Times.

Gujarat chief minister Bhupendra Patel and state tourism minister Purnesh Modi will be in attendance, in addition to Shah.

The regular procession by BSF soldiers will be one of the main attractions, he added.

The Seema Darshan Project, at 125 crores, is being created as a major tourist site in Gujarat’s Nadabet, similar to Punjab’s Wagha-Atari Border.

The Nadabet Seema Darshan Project will be the country’s first state-of-the-art BSF project, illustrating the BSF’s origins, development, and role in battles, as well as the feats of the martyrs who have made ultimate sacrifices for the country.

The showpiece of the Seema Darshan Complex is a 30-foot high T-Junction Pillar decorated with murals showing border guards in action.

Another memorial, dubbed ‘Ajay Prahari,’ was built in honour of the brave troops who gave their lives while defending the country. The national flag of India has been raised to a height of 40 feet.

Through a combination of state-of-the-art visual settings, an Interpretation Centre has been established to acquaint visitors with the life of a BSF jawan as well as the everyday vicissitudes of the inhabitants of border communities. Visitors are likely to flock to the high-tech interactive displays, which include virtual patrolling, experience technologies, and simulators.

Six exhibits in the museum space are dedicated to the topographical and demographic characteristics of Nadabet, as well as its proximity to Gujarat’s international border. Officials say it will also provide insight on the problems posed by the most difficult border terrains. 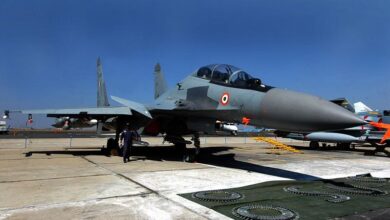