The Israeli businesses Steadicopter and Smart Shooter revealed in a press release that they intend to exhibit an armed and unmanned Golden Eagle multicopter next week.

The presentation will take place as part of ISDEF 2022, a defence trade show that runs from March 21 to 23 in Tel Aviv. The Golden Eagle is built around the Steadicopter Black Eagle 50E drone and the Smart Shooter SMASH Dragon System.

With the Black Eagle 50E UAV, Steadicopter, founded in 2005 and based in Migdal HaEmek in northern Israel, contributes to a robust and reliable carrier platform. According to the manufacturer, the multicopter can take off and land on a limited space, carry a cargo of up to 5 kg with a maximum takeoff weight of 35 kg, and stay in the air for up to four hours.

The system has the requisite mobility with a cruising speed of roughly 80 km/h and a top speed of about 125 km/h. The digital data connection enables the transmission of various data to the user, such as real-time video broadcasts and other sensory data collected by the drone. The Black Eagle 50E is transformed into an armed multicopter drone with a stabilised weapon system for several calibres after the Smart Shooter SMASH Dragon System is integrated. 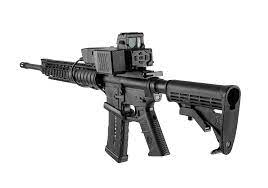 The SMASH Dragon, which was introduced at the start of the year, is based on the proven SMASH fire control system, which designs the shooter’s aiming point with a very high probability in the display using highly developed image processing and ballistic computer, therefore also without emissions. Controls the shot’s release as well as the optics.

The compact and light armament system, according to the company, can be fitted into a wide range of unmanned aerial vehicles. The weapon system is also well stabilised, according to Smart Shooter, to provide great accuracy even during aggressive flying movements. Furthermore, the conversion kit must be capable of accepting a variety of weapons with a calibre of up to 40 mm.

Sitharaman In The Rajya Sabha: For The 10 Years, No Defence Imports