In the midst of the country’s constitutional turmoil, Pakistan’s Army conducted a test of the surface-to-surface medium-range ballistic missile Shaheen-III on Saturday.

According to the Pakistan Armed Forces’ media wing, the test flight of this surface-to-surface ballistic missile was intended to revalidate numerous design and technical characteristics of the weapon system. 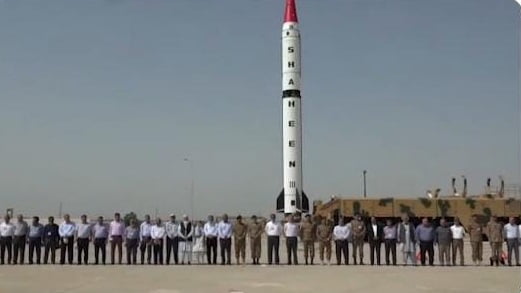 The solid-fuelled missile, which was outfitted with a Post-Separation Altitude Correction (PSAC) technology, was tested for the first time in March 2015.

The Shaheen-III is a Pakistani land-based surface-to-surface medium-range ballistic missile that was first tested by military service on March 9, 2015.

In response to India’s Agni-III, Shaheen III development began in secret in the early 2000s.

Shaheen was successfully tested on March 9, 2015, with a range of 2750 km (1700 mi), allowing it to strike all of India and reach deep into the Middle East and parts of North Africa.

The Shaheen-3 has enough range to attack the whole Indian subcontinent from launch sites in much of Pakistan to the south of Islamabad.

According to Gen. Kidwai, the 2750 km range was established by the necessity to be able to target the Nicobar and Andaman Islands in the eastern Indian Ocean, which had been “built as strategic locations” where “India might consider of basing its weaponry.”

However, in order for a 2750-kilometer-range Shaheen-3 to reach the Andaman and Nicobar Islands, it would need to be launched from sites in Pakistan’s far east, near to the Indian border.

The Shaheen-3’s range, if placed in the western regions of the Balochistan province, would bring Israel inside range of Pakistani nuclear missiles for the first time.

In contrast to the Ghauri programme, which is predominantly based on a liquid-fuel system, the Shaheen programme is composed of a solid-fuel system.

Shaheen-1A is capable of reaching its target within a range of 900 kilometers.

Iran Says That Western Claims Show That Its Drones “Effective”

Russia Planning Its “Final” Attack On Ukraine; Donbas Main Target Of Its Plan To Take Over East