During Russia’s war against Ukraine, cruise and short-range ballistic missiles were among the most important weapons in its arsenal.

These missiles can reach the entire country of Ukraine, allowing Russia to target critical military infrastructure, particularly in western Ukraine, where Western weapons and equipment are being delivered.

Russia has launched thousands of missiles since the start of its attack in February. Despite having a number of modern missiles capable of precision strikes in its arsenal, Moscow is also launching older, less accurate Soviet-era munitions into Ukraine.

Many of the Russian missiles used in Ukraine were launched from ships or submarines, with the most well-known being the 3M-14 Kalibr cruise missile.

The NATO-designated SS-N-30A “Kalibr” missile family includes anti-ship, anti-submarine, and land-attack variants that can be launched from ships, submarines, and aircraft.

Kalibrs have a range of 1,000 to 1,500 miles and can conduct precision strikes using satellite navigation. They can carry a conventional high-explosive warhead weighing nearly 1,000 pounds and are frequently compared to the US-made Tomahawk cruise missile.

The Kalibr is one of the most recent and advanced additions to Russia’s missile arsenal, having entered service in 1994. It was first used in October 2015, when Russian warships in the Caspian Sea launched 26 Kalibr missiles at targets in Syria 1,100 miles away.

The Russian Navy has also used the anti-ship cruise missile P-800 Oniks. NATO calls it the SS-N-26 “Strobile,” and it has a range of nearly 200 miles and a top speed of about Mach 2. Depending on the mission, its warheads weigh between 440 and 550 pounds.

Oniks missiles, which have been in service since 2002, are primarily launched from ships and submarines. The Russian Navy adopted the Bastion mobile coastal defence missile system in 2015, allowing Oniks launches from mobile ground-based platforms.

The precision of the Kalibr missile has alarmed NATO commanders. The circular error probability of the missile — the radius of the circle within which 50% of its strikes are likely to hit — is estimated to be less than 20 feet. It is estimated that the Oniks are less than 5 feet tall.

Russia’s ground-launched SRBMs, particularly the Tochka-U and Iskander-M missiles, have played a critical role in the war. NATO refers to them as the SS-21 Scarab and SS-26 Stone, representing the past and present of Russian SRBMs.

The Tochka-U missile, which replaced the Tochka missile that entered Soviet service in 1975, was introduced in 1989. The Tochka-U has a range of 75 miles and can carry a 1,000-pound high-explosive warhead, a fragmentation warhead, or a 100-kiloton nuclear warhead when launched from a mobile transporter-erector-launcher.

The TEL of a Tochka-U takes 16 minutes to prepare for launch. It takes about 20 minutes to load another missile. For its crew, the TEL has nuclear, biological, and chemical filtration systems.

The Iskander-M, which was introduced in 2006 as a replacement for the Tochka-U, has a range of 250 to 310 miles and can carry high-explosive warheads weighing between 1,060 and 1,540 pounds. It is also capable of carrying thermobaric, fragmentation, nuclear, or earth-penetrating warheads.

Iskander-M missiles are launched from a TEL capable of carrying two missiles. The TEL, which can also be outfitted with cruise missile launch tubs, is resistant to nuclear, biological, and chemical attacks.

Russia has been denied control of the airspace over Ukraine, but it has continued to launch cruise missiles from the air at Ukrainian targets. The newest missiles, which the Russians are proud of, are the Kh-101 cruise missile and the Kh-47M2 Kinzhal hypersonic missile.

The Kh-101, which debuted in 2012, has a range of 1,500 to 1,700 miles. It is capable of carrying a 990-pound high-explosive warhead as well as fragmentation or nuclear warheads. Precision strikes with a CEP as small as 20 feet are possible thanks to satellite navigation and an onboard computer.

The Kinzhal is one of Russia’s newest and most advanced weapons, as well as one of the few operational hypersonic missiles.

The Kinzhal, which is launched from a modified MiG-31 interceptor or strategic bomber, has a range of 1,000 to 1,200 miles and can carry a warhead weighing more than 1,000 pounds. It can reportedly reach Mach 10 speeds and, like other hypersonic missiles, can manoeuvre in flight, making it nearly impossible to intercept.

On March 18, Russian aircraft launched several Kinzhal hypersonic weapons at an underground depot in western Ukraine, becoming the first hypersonic weapon to be used in combat. On May 9, three more Kinzhals were reportedly used in strikes against Odessa.

Overall, Russian missile strikes have had a significant impact on Ukraine’s war effort. Throughout the conflict, videos have emerged showing Kalibrs being launched from Russian surface ships and submarines, as well as Kalibrs flying over Ukraine and hitting targets.

Russian SRBMs launched from Belarus and Russia have struck military bases and airfields, while Tu-22M, Tu-95, and Tu-160 bombers are said to have launched missiles at similar targets while flying over Belarus and the Black Sea to avoid Ukrainian air defences.

The strikes have reportedly made it difficult for the Ukrainian Air Force to operate from airfields and have targeted Western weapon shipments. To avoid being attacked, Ukrainian recruits are now training as far away as Britain.

Russia’s missiles routinely strike civilian targets, such as a Tochka-U strike on a railway station in Kramatorsk on April 8 that killed 59 civilians (including seven children) and a Kh-22 strike on a shopping mall in Kremenchuk on June 27 that killed 20 civilians. Russian denials in both cases have been disproven. 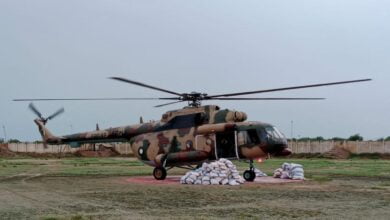 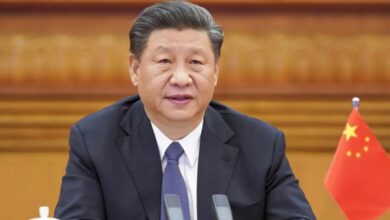 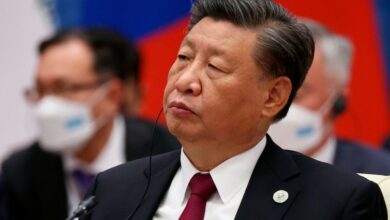 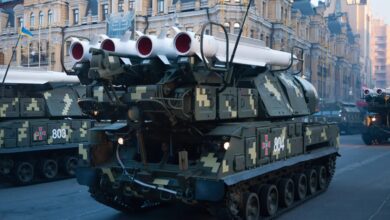