Russia plans to attack Ukraine one last time around the New Year, and its forces are getting ready to take over the old industrial heartland of Donbas in the east right away.

Russia took over Donetsk, Luhansk, Kherson, and Zaporizhia (two provinces of Donbas) in September, but it still doesn’t have full military control over these four “oblasts” (provinces).

Valery Gerasimov, who is in charge of the Russian army, said that Russian troops are “focused on finishing the liberation” of Donetsk. Gerasimov also told AFP that Russia had used hypersonic missiles, like Kinzhal missiles, for the first time in Ukraine. These missiles are part of Putin’s arsenal of weapons that he has called “invincible.”

Russian sources say that the Ukrainian army is running out of weapons, and Ukrainian President Volodymyr Zelensky, who visited the US on December 21 for the first time since the war started in February 2021, hopes to get an extra $45 billion in aid from Joe Biden to help “defend our values and independence.”

Donbas is where coal and steel are made in Ukraine. Its two biggest eastern regions, Donetsk and Luhansk, are south of Mariupol and north of the Russian border.

Most people in Donbas speak Russian, but according to BBC, the so-called “people’s republics” created by Russia are not recognised in the area.

On Thursday, the Kremlin said that Kiev and Washington were ignoring its worries and that the US was using Ukraine as a battleground to hurt Russia. 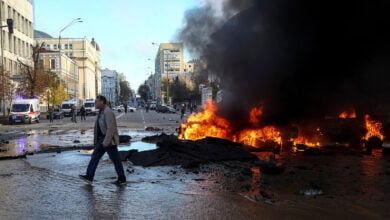 In One Of Russia’s Biggest Attacks Yet, Missiles Start Falling On Ukraine